Lighting a fire under WMATA 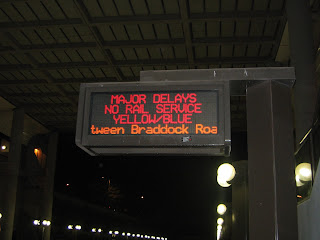 Not that WMATA needs any help in lighting fires, but it seems that the rail system's problems are multiplying. According to the Washington Post, fires and smoke caused a set of major service disruptions "without precendent" in Metro's 31 years. The service disruptions which I reported yesterday recurred again today with smoke and fires causing the closure of Metro lines again during Monday evening's rush hour.

WMATA issued a press release this evening summarizing the extent of the service disruptions yesterday which caused major delays on all five Metro lines. Beginning at approximately 5:30 pm on Sunday, several apparently unrelated problems sparked fires and smoke in various parts of the rail system in both the District of Columbia and Northern Virgina.

The Department of Homeland Security made it clear that this was not an act of terrorism. Even so, the almost simultaneous breakdown of Metro service represented the cascading failure of transit infrastructure which usually appears only in the nightmares of transit officals. This meltdown culminated with the breakout of a fire on a metrobus which was shuttling passengers around Farragut North on the Red Line. According to the Washington Post, only one of the sixty-five passengers on the bus was injured during the evacuation of the burning vehicle at 12th and Eye, NW.

WMATA has tasked a team of workers with discovering the causes of this major breakdown of Washington's transit infrastructure. They have are apparently working with Virginia Dominion Power to investigate a possible Northern Virgina power surge as the cause of some of the service disruptions.

All in all, between 5:45 and 9:15 yesterday evening, the following service disruptions were reported:
The causes of Monday's outages were not immediately available. The Washington Post reported that officials were "baffled" over the incidents which many are beginning to wonder may be more than coincidental. The evening rush hour disruptions caused the closure of U Street-Cardozo and halted all Green and Yellow Service through the station for over an hour. The Post reported that at least one Metro customer was reduced to tears during an ordeal which lasted over three hours while she was stranded at the Pentagon while smoke caused the closure of that station.

Metro serves our National Capital with distinction most of the time. Recent problems, however, are shaking citizen's confidence in the ability of WMATA to get us where we need to go. A recent column in the Post on August 12th opined that decision-making at WMATA was not so good. This was mainly in response to major delays on the Orange and Blue Lines during another of WMATA's cascading failures. This followed power problems earlier this year which virtually shut down the Green Line, whereupon thousands of commuters were turned away from already-full Metro stations.

WMATA is under a mountain of pressure to provide adequate transportation to the hundreds of thousands of commuters, tourists, students, and locals who rely on what has been characterized as America's subway. Compunding this problem is the lack of dedicated funding for the region's transportation infrastructure and a federal government who, judging from the way it spends its money, is still obsessed with building roads. According to an article in Monday's Post, next year the federal goverment is projected to spend $42 billion on roads, but only $1.4 on transit projects.

In the face of the Interstate 35W Bridge collapse in Minneapolis, the federal government has been slow to react to the decay of our nation's aging infrastructure. Congress must do what is right, not what is necessarily politically popular; they must dedicate themselves to the generation of tomorrow and set aside revenue for the repair of both transit and roadway infrastructure. Furthermore, they must commit funding to alternative forms of transportation. Peak Oil is rapidly approaching and highway building should go the way of disco.

However, even considering the challenges facing America's second busiest rail system, WMATA must work to prove that it can cope as well with emergency situations as it can with normal rail operations. I do not envy the position of the WMATA personell who are charged with responding to fires, bomb threats, and other strains on the system, but things must improve. A good start would be improved communication.

I was one of hundreds of travelers stranded at Dupont Circle when Farragut North was closed Sunday, and the fifteen minutes of a tight-lipped public address system was stressful. When the announcement came that shuttle bus service was being offered, it was not at all clear where we should exit or where we would find the buses. Having already waited a quarter of an hour at the station, we were not told how long of a wait it would be before buses arrived. As a resident of the Washington Area, I was able to find my way to another Metro stop by walking over a mile, but I wonder what the tourists from Munich or the protesters from Des Moines did when they were forced into the hot August evening.

After a second day of track fires and power failures, I would also encourage WMATA to undertake a systemic evaluation of the infrastrucutre which provides power to the Metro. It is obvious that something has been stretched too thin on Metro. I hope that it is only the patience of commuters and not a vital part of the infrastructure of day-to-day operations.
Posted by Matt' at 9:24 PM