MARC on the Right Track 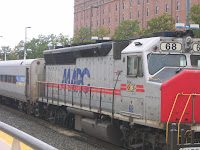 The Washington Post reported to today that MARC, the commuter rail service for the Maryland and West Virgina suburbs of Washington and Baltimore, is planning a major expansion in service which would potentially add Virgina and Delaware to the system. Details about the plan, released in the Baltimore Sun, call for existing service to triple by 2035, with many of the projects to start shortly. 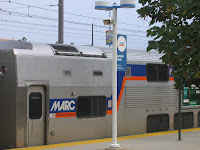 At present, MARC, short for Maryland Rail Commuter, operates three lines, all terminating in the south at Washington's Union Station. The Brunswick Line operates peak direction service during rush hours between Martinsburg, West Virginia and Washington and between Frederick, Maryland and Washington. The other two lines, the Camden and Penn Lines, operate along different routes between Washington and Baltimore, with the Penn Line continuing northward to Perryville, Maryland. Bidirectional service is offered on both lines, although the Camden Line has peak-hour service only. Service is only offered on weekdays throughout the system. Demand has grown faster than supply for the past several years, and many trains operate with standing passengers. Already, MARC operates America's fastest commuter rail service, with trains on the Penn Line able to achieve 125 mph. 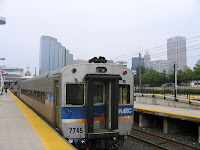 The proposed service increases are estimated to cost several billion dollars over the next 28 years, but offer a cost-effective way of improving travel throughout the Washington and Baltimore regions.

The plan calls for the following:
Maryland is really stepping up to the plate with these service expansion proposals. Let's hope that other cities begin to see the impact that commuter rail can have on the built environment. Articles like this really tell me that I've picked the right place to live.
Posted by Matt' at 9:27 PM