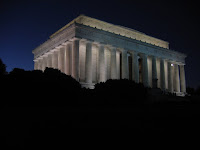 I’ve decided to start a new section of my blog devoted to introducing . My first profile is appropriate because it introduces the most well-known aspect of the as a part of this region.

For countless Americans the symbol of our national capital is the Mall. This expanse of green is bounded on each side by marble monoliths. This park-like stretch of monuments, museums, and federal offices along with a few surrounding blocks make up ’s Federal Quarter.

The idea behind the Mall dates back to Pierre L’Enfant’s plan for . Unfortunately for early Washingtonians, however, the plan was not realized until the McMillan Commission of 1901 cleared the area of its railroad tracks and slums. The area on the reclaimed Potomac Flats was set aside as the National Capital’s contribution to the national memory. Based on the ideas of the city beautiful, this part of became home to the temples of democracy and memorials to fallen Americans.

While all of holds a special place in the American psyche, this is undoubtedly the part that truly belongs to all Americans. From the Lincoln Memorial on the banks of the , the President who held this country together during its most difficult time looks admonishingly eastward. His gaze falls not only on the eager eyes of school children, but also on the houses of Congress two miles distant.

The Federal Quarter was meant to make rival the capitals of all the other great nations of the world. In that effort, it does a supreme job. Here, in the shadow of the obelisk memorializing the first President, stand ’s monuments, her government offices, and national museums.

This small part of the district is an integral part of the city as much as it is an integral part of the nation. Washingtonians have at their fingertips access to some of ’s finest museums and galleries. The Mall is an excellent place to recreate. One of my first experiences on the Mall as a resident was a free concert on the West Lawn of the Capitol put on by the National Symphony Orchestra. Even in the height of tourist season, residents can be found jogging and playing baseball in this great park. The Mall is ’s answer to and all rolled into one.

An increasing number of Washington’s visitors are venturing beyond the parts of the city dominated by columns to find a diverse metropolitan area with far more to offer than a mere course in American History. Through these explorations, visitors uncover that is more than a place to build monuments to those who’ve gone before us. They find that the District houses more than Senators and does more than just the business of government.

For many Washingtonians, the Mall is also a reminder of the Washington/National Capital dichotomy. While the residents of experience this city in the same ways that other Americans experience their cities, there is a distinct difference here. Some believe that the District belongs to all Americans as the National Capital. This belief contributes to the continued denial of the District’s right to govern itself.

Of course, this dichotomy does not reduce the importance of the Mall to the city or Washingtonians love for the Mall. The Federal Quarter may remind District residents of their lack of a vote, but it is just as symbolic of to them as it is to all Americans. It serves as a reminder of the special place which occupies upon the national and world stages. The Federal Quarter is what many see at first glance, and without it would not be at all.

The Federal Quarter is represented by all the state quarters, but the rest of the city is a stark reminder that some American citizens still don’t have their own representative in Congress or in coinage.