Several weeks ago I started a new section of this blog, dedicated to proposing potential futures for transit here in DC, and potentially elsewhere. While this activity is largely an exercise in fantasy, it can also be used as a tool for envisioning a future with a greater emphasis on transit.

After hearing comments from readers in regards to my "Regional Rail Plan,"I have decided to make some changes. For the sake of brevity, I will try not to repeat myself. For more information on the constraints facing commuter rail at present, see my first post in this series: Make No Little Plans I. For the earlier iteration of this plan, see: Make No Little Plans II. And finally, for my initial response to commentary on these issues, see: RLS Kicking In.

I'll also take this opportunity to remind my readers of others like me who have been indulging in a similar exercise in imagining a Baltimore-Washington future full of transit:
And without further ado, here's my revised regional rail plan. Remember, this plan only deals with the commuter/regional rail element of Washington's transit future. I will be releasing the metro (heavy) rail and light rail elements soon--perhaps later this week. 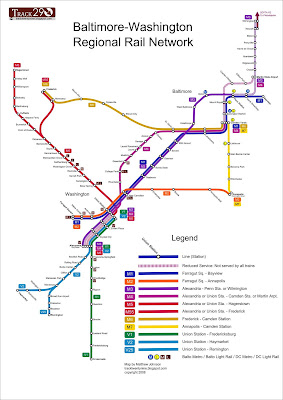 New to the Plan:
I decided to reconsider the omission of a direct connection between Annapolis and Baltimore. In that regard, I added the line M7, which will operate from a shared terminal at Annapolis-Washington Street with the line M2 (Farragut Square-Annapolis). There are some difficulties, however, with getting a train between Baltimore and Annapolis these days. It was for this reason that I left this route out of the original plan. These difficulties are elaborated below as I describe alternative alignments for the M7 line.

There are three corridors which I judged to be able to be used for a train line. Each has its own problems and advantages, and based on these I have selected what I think is the most feasible alignment.

Alternative 1:
The first alignment I considered would connect Baltimore and Annapolis by running trains south on the Northeast Corridor from Penn Station (or Camden Station using the M1 connection) as far as Bowie State. Just south of the existing MARC Station, the line would follow the CSX line (Pope's Creek Secondary) which runs through Upper Marlboro and Waldorf on its way to the PEPCO generating plant at Morgantown. At Route 50, the line would merge with the proposed M2 Line running from Farragut to Annapolis.

The main advantage of this routing is that it uses existing rights-of-way for its entire trip. It follows the Northeast Corridor, the Pope's Creek Secondary, Route 50, and the abandoned interurban tracks from Annapolis Mall to Washington Street. Unfortunately this route, while perhaps the most financially and politically palatable is the least attractive to commuters. It is a trip of over 40 miles from Washington Street to Penn Station. The same distance by car is under 30 miles (via Ritchie Highway).

Alternative 2:
In order to shorten that distance, the same route could be used between Baltimore and Odenton, with the route operating along with M1 or M3 trains. From Odenton to Annapolis, the line would follow the abandoned track of the Annapolis and Elk Ridge Railroad to Annapolis Mall and on to Washington Street. While this alignment shaves more than 11 miles off of Alternative 1, it has its own drawbacks. Much of the route is directly adjacent to Generals Highway, making it undesirable from a speed and NIMBY perspective, although in this case it would be more of a front yard objection. Additionally, Annapolis Mall was built in the right-of-way, so trains would have to curve around it.

From the terminal at Annapolis Washington Street, it will cross the Severn River south of the existing Route 50 overcrossing, after passing adjacent to the Naval Academy's stadium. The bridge used by the interurban to cross the Severn is no longer present, and a replacement will need to be constructed. The main obstacle, however, to Alternative 3 is the Baltimore Light Rail. The B&A right of way was used to construct the line from Downtown to Glen Burnie. It is possible, although would likely be extremely difficult, to squeeze a third track into the LRT cross-section between Glen Burnie and Linthicum. North of Linthicum, the right of way is slightly wider, and could accommodate commuter rail more easily. The easiest alternative to the Glen Burnie section would bypass the town alongside Route 100 and would skirt BWI along Aviation Boulevard.

Regardless of the exact alternative above, I think a direct Baltimore-Annapolis connection is needed. I have chosen, for my plan, to fit the M7 into the LRT alignment at Glen Burnie. It is the most direct route and has the added benefit of serving the center of Glen Burnie.

Revisions:
Extension of the M4 (Camden Route)
Based on comments made on my previous plan, I have decided to defer to the Baltimorians among us and add service to Charles Village as per MTA's plan. The M1, however, will continue to go to Penn Station. Some Camden trains will use the Howard Street Tunnel to continue to Charles Village, Clifton Park, and Martin State Airport.

And, I want to thank Batman for pointing out that the Howard Street Tunnel is currently single tracked to allow higher freight cars to pass through. My proposal would require two tracks. Since passenger equipment is shorter than freight equipment, there should be no clearance issues.

Technically speaking, there would be no issues with also operating M6 (Baltimore-Frederick) and M7 (Baltimore-Annapolis) to either Penn or Martin State Airport Stations, but I have chosen to terminate them at Camden Station on my maps to eliminate clutter and to preserve space in the tunnel for M1 trains.

New WMATA [L] Logos
I have also included on the map white 'L's in brown boxes. These logos denote the light rail connections provided in my forthcoming Metro/LRT plan.

Oh, and I also added a new "Track Twenty-Nine" logo to the map.

I'd love to hear your comments. My last plan has been this site's most popular post. Let's keep the dialog going.
Posted by Matt' at 9:52 PM

Hi Matt - Your blog about regional rail is an example of what I see as the emergence of "regional community." It is going on all over the U.S. and the world. A link to this post will be in the April 23, 2008 issue of Regional Community Development News. It will be on-line April 24 at http://regional-communities.blogspot.com/ Please visit, check the resources and even consider a link. Cheers. Tom

Beautifully rendered. The only "problem" is that you didn't extend your lines far enough south, to Richmond, and beyond (Petersburg, Norfolk). And I have some other quibbles, but who doesn't.

But we need to stay in touch.

Oops, one other quibble. I think that the idea of one regional railroad system needs to be promoted, rather than focusing on each state somewhat separately, although it's great to see how MARC has stepped up.