In Part 1 of this post, I discussed my entry in Greater Greater Washington's Metro Map Contest.

My earlier post talked about the rules of the contest and my goals for the redesign. Now, I'll discuss some of my design decisions. 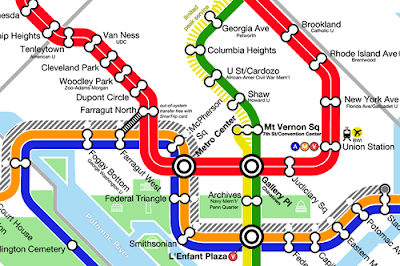 Laying the Groundwork:
I chose to keep certain elements. The Potomac and Anacostia Rivers provide needed geographic context, as does the National Mall. I also retained Wyman's icons representing the Capitol, Washington Monument, Lincoln and Jefferson Memorials, and the White House.

The scale of my map is similar to Wyman's. Per the contest requirements, the resolution of the map is the same as those that appear in railcars. On my map, the "square" that represents the boundary of the District of Columbia and Arlington County is the exact same size as the one on Wyman's map.

Lining Up:
Once I'd laid out the basic geography of the map, I started adding rail lines. These lines are by necessity thinner than those on Wyman's map. This is due to the addition of the Silver Line through central Washington.

As far as the lines were concerned, I tried to strike a balance between the layout of Wyman's map and actual geography. That mainly meant changes to the outer ends of the Green Line. North of Fort Totten, for instance, the Green Line is basically running east-west, though Wyman's map shows that as a 45 degree angle.

I also turned the Columbia Heights "corner" into a smoother curve. Doing that allowed the map labels to be placed more logically and gave the Mid-City subway a less severe set of curves.

Dotting the Is:
With the lines laid out, stations came next. But I struggled a bit with creating an icon.

I first tried keeping a single dot per station, as is the case with the current map. But there was no way to create an attractive dot that would work both where 3 lines ran concurrently and where a single line ran alone.

I discounted using dots of different sizes because I wanted the map to be consistent. Use of ovals and rectangles seemed too crude for the map design I sought. And using London-style hatches wouldn't work with the dual Red Line.

Stumped, I turned to Mark Ovenden's book, Transit Maps of the World. Leafing through, I hit upon Amsterdam's map as having the solution. For my map, I used what I call "linked dots" for most stations. I kept Wyman's "target" symbol for the perpendicular transfer stations.

To indicate terminal stations, I filled the station dot with the color of the service that terminates there. I hope that this calls the eye to those stations.

Crossing the Ts:
With lines and stations drawn, it came time for labels. For this task, only one font would do: Helvetica.

Aside from the fact that I'm a huge Helvetica fan, it's the font used throughout the system in signage. It's even the font used in the Metro logo.

With that decision made, the question of placement arose. I was determined to eliminate the text/line overlap that proliferates on the current map. That meant, in some cases, making changes to lines. But it also meant rethinking the way station names are handled.

To counter the "name sprawl" of station monikers, I broke up the longer names into a primary name and a subtitle. This makes it a lot easier to fit names onto the map. Ideally, though, Metro would just shorten the names.

End of the Line:
In order to better accentuate terminal stations, I bolded those station names. I also colored in the "dot" representing the station.

For stations where trains turn short frequently, I decided to go a step further. At those locations, I actually pulled a "spur" off of the mainline. Michael Sypolt (@TransitGuru) told me it reminded him of a train pulling into a pocket track, which is what happens at these locations. I did this to accentuate that some trains stop and go no further.

Doubling Up:
Because the Red Line is operationally two lines, I chose to show it that way.

This allowed me to easily show that off-peak, Silver Spring - Grosvenor trains are extended to Shady Grove. It also would hint that frequencies are higher, though that is not clear from the map alone. And it further accentuates the terminal problem.

Connecting the Dots:
One of the last elements I added to the map were "connection" icons.

I chose to use a standard type of icon to show connections to Amtrak, MARC, and VRE. Those services are shown using a colored circle with an A, M, or V as appropriate. They're "chained" together and to the station where the connection can be made.

This seems to be superior to the current practice of putting the Amtrak, MARC, and VRE logos right on the map haphazardly.

I replaced the generic hatchback that Wyman designed with the universal "P"-in-blue-circle to indicate stations with parking.

To show airport connections, I used an airplane in a yellow circle, with the airport code below. I put that next to a bus or train as appropriate to indicate the connection. In the legend, these connections are further described.

I'd appreciate your feedback on the map. In the future, I hope to continue to build upon it and improve it.
Posted by Matt' at 2:35 PM