A Diagram is not a Map

I was reading one of Dr. Gridlock's entries yesterday morning when one of the comments caught my eye. Yesterday, Dr. Gridlock talked about Monday's HOR subcommittee hearing on the June 22 accident on the Red Line. In particular he said this:

Until Metro is sure that all trains can be detected by its electronic protection system, it will send only one train at a time through the crash zone between Takoma and Fort Totten. Next time you're riding, look at a Metro map to see how long a stretch of track that is. It's one of the longest gaps between stations in the entire system. Trains would normally be able to reach 59 mph between them.

The commenter that piqued my interest, Chris737, had this to say:

Of course, with its perfectly staight lines and 45 degree angles, the Metro diagram is more of a work of art than a map to scale....The distance between
Takoma and Ft Totten is about the same as the distance between all of the other
station pairs north of Brookland.

And he's right. The section of track between Fort Totten and Takoma is not really that long. The problem is that when many people envision the region, they think of the Metro Diagram. Let's not pretend that it's a map; because it isn't - not really. It distorts distance, and Dr. Gridlock should know that.

Of course, all maps distort distance to some degree. After all the world is round-ish and maps are flat-ish and square-ish. Technically speaking the Metro Diagram is a topological map, but in my opinion, is so far removed from geographical reference as to defy the term "map." 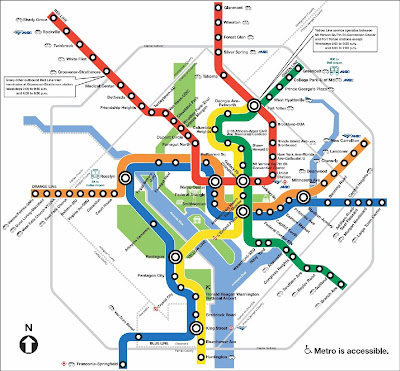 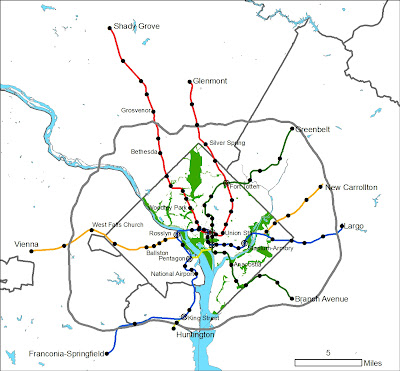 Anyway, I decided to look into it. As it so happens, of the 88 "links" in the system, the "link" between Fort Totten and Takoma is the 16th longest at 1.92 miles. It is slightly longer than the 1.22 mile average distance between stations systemwide. I wouldn't say that it was "one of the longest gaps between stations." Of course that doesn't invalidate Dr. Gridlock's key point, namely that trains travelling between those stations normally do reach 59 mph.

Here's a look at the top 20 longest segments in the system:

But here's the rub; the sore spot that is causing friction between Dr. Gridlock and myself.

*NOTE: For the purposes of the rest of this discussion, I'm measuring the WMATA
printable map, available on their website, printed on 8.5 x 11 inch paper. In
this case, the distances are scalable upward, but their relationship to the real
distances remains absent no matter what the size of the diagram.

Additionally, if we're to use Dr. Gridlock's metric, please note that the distance (from the center of the station "dots") between Metro Center and Gallery Place is just under half of the distance between King and Van Dorn Streets on the diagram. In reality, the 3.1 miles between King Street and Van Dorn Street dramatically dwarfs the mere 1700 feet between Metro Center and Gallery Place (center of platform to center of platform).

Let's consider the Orange Line in Arlington (Orangington?) and Fairfax Counties. Each station between Court House and Vienna has the same separation on the diagram, 0.55 centimeters. However, while they all appear to be the same distance apart to someone only familiar with the schematic Washington popularized with the 1976 subway map, the actual distances vary greatly. The stations within the Rosslyn-Ballston Corridor are within walking distance of each other, but those far outside the urban core are much further apart. Between Court House and Ballston, distances are approximately 1/2 mile. Beyond Ballston, distances increase to over 2 miles between stations. The range? The shortest distance is between Clarendon and Virginia Square at 0.47 miles. The longest distance is between Dunn Loring and Vienna at 2.51 miles, the 6th longest distance between stops in the system.

But don't expect Metro's system diagram to tell you this.

You don't need to know anyway. Overly complicated maps can be the bane of travelers. Just take a Metro bus map, for instance.

And we've known this for many years. In fact, the topological map of the London Underground, designed by Tube worker Harry Beck in his spare time in 1931, set the standard for other systems, including Washington. But they don't always turn out to be as popular as one would think.

The geography-distorting Vignelli Map of the NYC Subway lasted from 1972-1979, and can be seen in period films such as "The [original] Taking of Pelham One Two Three" and "The Warriors." But the current map showing trains curving around the geometric jungle of New York won out. Even now, MTA is fighting against anything less accurate than pure geography - like the Kick Map, for example.

But in our case, a topographic map works just fine. In fact, it has become a major identifier of our region since its inception over three decades ago.

Just don't think that it represents the true geography of the region.