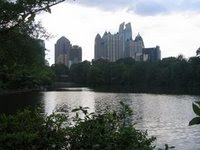 I grew up in North Georgia, not too far from sprawling Atlanta*. Even Atlantans know that it is the poster child for "dumb" growth in America (perhaps in the New World). Yet the region continues to swallow up farms and forests at an alarming rate. Despite growing environmental consciousness and rising gas prices, most Atlantans don't see any reason to change their behavior. Others have made the choice to live a more urban lifestyle. When I moved to the big city for the first time, that's what I did. I lived right in the heart of it all, just across the Downtown Connector from Midtown.


In the Big Peach, they've come up with a moniker to reflect this dichotomy. I am, of course, referring to the ITP/OTP distinction. You see, I lived Inside the Perimeter (ITP), which is what we call our Beltway, Interstate 285. Like others living inside the circumfrential highway, I viewed the suburbs as frightening and concieted (e.g. Scarietta, county seat of Snobb County) - they were a place I rarely ventured. We ITPers viewed suburbanites (Gwinnetians, Cobblodytes) as people who don't care about their actions. People who belch exhaust from their giant SUVs while cruising on 6-lane arterials to go the nearest store (which is usually a supermarket) for a few items. People who come into the city for work, but won't be caught dead there after 6:30P (probably because they fear that they will get killed if they do stay that late).


But OTPers have their own preconceptions about ITPers. After all, we all are pretty much liberal-pinko-commies who only shop at Whole Foods and go everywhere on our bikes (or so they say). We are the ones alone who can differentiate between the 71 different Peachtree streets (West Peachtree, Peachtree Battle, Peachtree Industrial, you get the idea...) ITPers are always championing kooky causes like transit expansion, peace, and an end to sprawl.


And so ITPers and OTPers face off across the 8-lane trench of a freeway which has come to symbolize the mental divide within the region. As an "insider" I always saw ITP as a badge of pride. Living the urban lifestyle was something of which one could and should be proud. I doubt that OTPers saw us the same way. For them the distinction was probably less clear. After all, most of the world is outside of Atlanta's Perimeter. Certainly most of the region is. Anyway, while we ITPers always looked at OTPers with disdain, I don't imagine that OTPers were too broken up about it.


But I left Atlanta. I moved to Washington, where the Beltway is not seen as a wall between city and suburb, but rather as a barrier between "Washington" and "Uhmaricuh". Politicos and pundits from around the nation disparige Beltway Insiders as disconnected from the pulse of the nation; as representative only of special interests. And since they've stolen the term, we can't use it to define the city/suburb lifestyle choice.

During my first two years here in Metropolitan Washington, I lived inside the Beltway. I saw the Beltway much the same as I saw the Perimeter, but the distinction was not so clear. Here, the dichotomy between city and suburb is more blurry. This is probably due mainly to the politics. In Atlanta, 285 is seen as a dividing line between Democratic and Republican voters. In Washington, even the suburbs are fairly liberal. Besides, the region as a whole is far denser than Atlanta - even the Washington suburbs, on average. Of course, you'd probably have a difficult time telling the difference between Loudoun County, Virginia and Forsyth County, Georgia.


But I suppose the primary difference is that in Atlanta, being from Inside the Perimeter is a badge of pride. In Washington, being Inside the Beltway is not a term of endearment.


Even though I don't mind the Beltway moniker, I can no longer brag about my ITP status.


I've moved to a wonderful little town, just outside the Beltway. This place was an experiment in Planning long before anyone thought a superhighway ring-road was necessary; long before anyone even thought of superhighways (at least outside of Germany). I've moved to Greenbelt, Maryland, one of the best preserved examples of New Deal-era urbanism in the country. And while I don't live in Old Greenbelt, the original planned community, I'm only a few minutes away on foot.


I still am slightly anxious about my new status. (What will my ITP friends say? What will my readers say?) But overall, I know my life hasn't changed all that much. I'm still transit dependent and I'm still as devoted to liberal causes as always. But I am a little more disconnected from the city, from the amenities that make urban life great.


Greenbelt is not devoid of some of those amenities, however. It is a bastion of activism and liberalism, after all. And considering its roots in the New Deal, it's no wonder. That's probably how it got its nickname - the Peoples' Republic of Greenbelt. I have no doubt that I'll fit in well here. But I do wish the buses came more frequently.

*Note: The place where I grew up is now a part of sprawling Atlanta, although it wasn't really when I was growing up there.
Posted by Matt' at 10:00 AM