It's been a crazy day here in Washington, with the sudden news of the stripping of funding for the H Street Streetcar. However, after a torrent of phone calls and emails, the DC Council has reversed their decision and found the $47 million needed for the line.
Posted by Matt' at 3:47 PM No comments: Links to this post 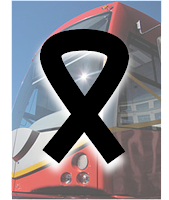 This morning, the DC Council voted to strip $49 million from the Streetcar program. This budget change was made by the Chariman, Vincent Gray, at 2:00 am the morning of the vote. There was no time for public or council discourse on the issue.

Despite the fact that streetcar rails have already been laid between Oklahoma Avenue and downtown, the DC Council has decided that H Street, devastated in the 1968 riots, does not deserve a second chance at life.

Update:
The Council has restored funding to the H Street Streetcar. They were inundated with calls and emails.
Posted by Matt' at 12:27 PM No comments: Links to this post For out-of-towners, navigating the Metro system can be a daunting task. Metro could make directions easier and improve wayfinding in the system by providing more information about train directions on signs.

The system's use of colored lines and destination station to identify train direction works fairly well for Metro, especially given the structure of the system, but it can be confusing to see one train going to Glenmont and another to Grosvenor when neither mean much to a visitor.

Where some trains don't go all the way to the terminal, like on the Red Line, the multiple terminals are even more confusing, especially when two Red Line terminals are two-word names starting with 'S' and the others one word starting with 'G', but one of each is on either end of the line. Other lines downtown also have two terminals in each direction since two colors share a track.

What could Metro do? Other transit systems approach this problem in several ways.

I just finished visiting the DC Streetcar brought down from Greenbelt yard. I've uploaded a few photos, with more to follow later. You can view my pics here:
If you're in the DC area, the streetcar will be on display at the Old Convention Center site (9th & H NW) from 11-7 though Saturday, except that it closes at 5p on Saturday.
Posted by Matt' at 5:10 PM No comments: Links to this post