Yesterday, I recounted the 13 rail systems I added to my "list" this year.

Over the past few years, I've been trying to ride each rail transit system in the United States. And I've made quite a bit of headway, too. 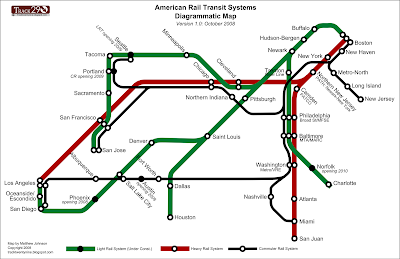 Below is the list of American systems I've ridden (in bold). I've organized them by mode. Within each mode, the year I first rode the mode is in parentheses. Non-bolded, red entries are systems I have not yet ridden.
The list groups lines within the same modal category operated by the same transit operator together. For example, I consider the Staten Island Railroad to be a part of the New York City subway (heavy rail).

Altogether, I've ridden 12 of the 13 (92%) American heavy rail systems, 18 of 25 (72%) of light rail systems, and 19 of 23 (83%) of commuter rail systems. Additionally, I've ridden 5 people mover/miscellaneous systems, all 3 modern vehicle streetcar systems, and 5 heritage/original streetcar systems.
Heavy Rail
Light Rail
Commuter Rail
AGT/Miscellaneous
As a general rule, I don't count fully self-contained people movers toward this list, although I do ride many of them. For instance, I've lost count of the times I've ridden the Atlanta Airport APM, but I don't count it, since it is entirely within the airport. This list is probably missing several which I have not ridden and am either unaware of or forgot to mention.
Streetcar
I've further sub-categorized streetcars into modern, heritage, and original. Heritage includes lines that use faux-heritage cars, even ones built specifically for the line. Original lines refer to lines that never closed permanently but were not modernized into LRT.
I don't count trolley museums or seasonal/part-time services.
I've made a lot of progress since I first boarded MARTA somewhere around age 8. I didn't really start trying to ride them all until about 2006, or so.
Anyway, if it's in red (or blue), I intend to ride it one day. I'm hoping to polish off Cleveland (and heavy rail) in 2011, along with a few others.
And of course, as I travel, I'll re-ride many of those I've already checked off. After all, it's the journey that matters, not the destination.
Posted by Matt' at 1:18 PM 7 comments:

For the past several years, I have been working on a long-term goal: to ride every rail transit system in the United States. I've been doing much better than I ever could have anticipated when I first started this a few years ago, but there's still plenty left to do.

This year, I added 13 rail systems to my list. In March, I traveled to Morgantown, WV to ride their Personal Rapid Transit system (also called "Group Rapid Transit). It was quite enlightening. And the PRT runs on rubber tires, so "rail" might not be technically correct, but I think it's appropriate, given the characteristics of the system.

I traveled to Southern California, in August. While there, I added several new systems: San Diego light rail.
In October, I traveled to Railvolution (my 4th) in Portland. I spent the weekend beforehand in Seattle and Tacoma, where I rode quite a few new systems. I continued on to Portland, where I added 1 new system, the Westside Express Service, a commuter rail line.

After the conference, I took Amtrak's Empire Builder to Chicago, where I spent a few days. While there, I added one new rail system, Indiana's South Shore Line commuter rail. Next time, I'll look at all the American rail systems I've ridden.
Posted by Matt' at 12:05 PM No comments:

Okay, so technically this picture is not of transit, but I didn't want to wait until Friday to post it. Besides, I did shoot it from a transit platform. I went out early on Saturday to catch a glimpse of the Liberty Limited. The Liberty is a train made up of privately owned locomotives and railcars and is used to transport wounded veterans from Washington to Philadelphia for the Army-Navy game.

The two locomotives in the lead are owned by a man named Bennett Levin, who also owns the platform observation car at the rear of the train. Both locomotives are E8As, and are painted in the tuscan red of the Pennsylvania Railroad.

It was quite a thrill to see this train made up of cars from the golden age of railroading. And the streamlined diesels were quite a sight to see as well, roaring up the Northeast Corridor. I was also very excited to see for the first time in my life PRR 120, the observation car at the rear of the train. It was one of the first privately owned railcars in the United States, and helped to start that trend. Private railcar ownership has helped to preserve many of these cars, which otherwise would have ended up in museums or the scrap heap.

Car 120 carried the body of Robert F. Kennedy from New York to Washington to be buried at Arlington in 1968, when tens of thousands lined the tracks to say their final goodbyes.

This trip of #120 was a bit quieter. At the Seabrook MARC station, where I took these photos, only a few railfans looked on. But the cold morning was well worth the excitement.
Posted by Matt' at 9:00 AM 2 comments: On my recent trip from Portland to Chicago, I
snapped this picture of the east- and westbound
Empire Builders meeting at Spokane, Washington.
My photostream
Posted by Matt' at 2:21 PM No comments: