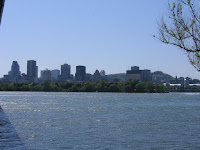 This post is the second in a series of posts I am writing about lessons planners could learn from Canada. My recent trip showed me North American cities that have done a better job of managing their urban fabric than is typical south of the 49th Parallel. Sorry it has been so long in coming.
From Halifax, my trip took me to Montreal, a charming city on the Saint Lawrence River (proncounced san la ranh). It's almost hard to believe that Montreal is a North American city, but as European as it is, it is also clearly of the new world.

What struck me as Montreal's greatest asset were its large parks. While pocket parks are certainly essential to all urban places, they aren't the kind of parks to which I am referring. I am rather referring to the types of large urban spaces that Frederick Law Olmstead was so famous for.
In the center of the Island of Montreal stands Mount Royal from which Montreal gets its name. This entire mountain is a beautiful Olmstead-designed park. The park appears wild, which is often a feeling Olmstead often tried to create. It offers a great place to get away from the city without actually leaving. Once under the tree canopy, one can really almost forget that one is surrounded by one of Canada's largest metropolises. 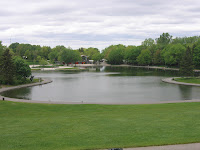 On the shoulder of the mountain, a meadow appears complimented by a beautiful lake. This lake (Lac aux Castors/Beaver Lake) was reminiscent for me of Lake Clara Meer at another Olmstead Park, Atlanta's Piedmont Park. Higher up, one reaches an overlook and plaza. Here, the views of downtown Montreal are breathtaking, rivaled perhaps only by the view of Pittsburgh from Mount Washington. 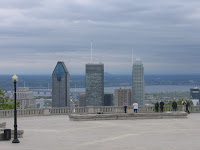 In addition to Mount Royal Park, Montreal is complimented with parks running along the Saint Lawrence. In an attempt to view the rapids on the river upstream from Montreal, my traveling companion (who is a whitewater enthusiast) set off along the Metro to Angrignon. From there we walked through some quiet neighborhoods to the riverside park, known as Parc Honorable George-Oreilly. The Lachine Rapids are quite amazing, but I was more impressed with the park. I was reminded strongly of my time in Europe by this greenway stretching as far as the eye could see in either direction. I suppose it is similar to the parks along Chicago's lakefront as well. At any rate, it is a well done park. I would love to have a park like this along the Potomac inside of the Beltway. 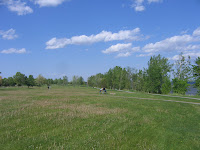 And of course, no visit to Montreal would be complete without a visit to Parc Jean-Drapeau, site of the 1967 Montreal Exposition. This park is on two islands in the middle of the Saint Lawrence. A short Metro ride from the city center, the park has its own stop. Of course in this case, the Jean-Drapeau Metro Stop was built to serve visitors to the Montreal Expo, but even if it weren't for that, I think access to parks is a worthwhile use for transit. I wonder if the FTA would look so favorably on a stop like Jean-Drapeau? 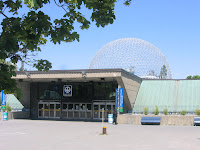 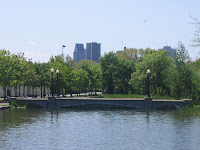 But even though Montreal has many good examples of parkland, it also has one example of poor urban design. The home of Olympic Stadium, Parc Olympique is the precise opposite of what Jane Jacobs would consider good urban form. The park is bleak and desolate, dominated by concrete. There were a few tourists about, but by and far the park was far to quiet to feel secure. Perhaps it was different during the Olympics, but the park should have also been designed for the post-Olympics. 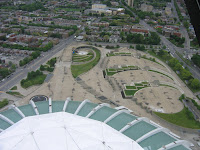 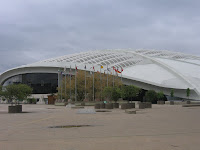 This park is part of Montreal's Olympic legacy as much as Munich's is, but in my opinion, Olympiapark in Munich is a far better remnant than what we see in Quebec. Of course, it's not too late for the park in Montreal. A number of changes would dramatically improve the atmosphere. More greenery would be an excellent start, and so would moving some of the walkways back down to street level where the "eyes on the street" concept would add a better feeling of security. Additionally, bringing more uses to the area would result in the park being more peopled.

All in all, it seems that Montreal would be a good place to take a lead from when it comes to park building.

One funny thing about Montreal, at least as compared to New York, is the relative lack of playgrounds. My wife and I took our child there several years ago, and the only public playground we saw was in the Parc Jean-Drapeau. In New York's in residential neighborhoods, playgrounds are one thing that aren't rare.

We had been to DC a year earlier, and we enjoyed the Roosevelt and Jefferson Memorials along the Potomac. More of that would be nice.