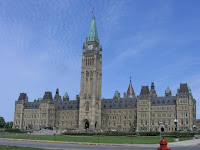 This post is the fourth in a series of posts I am writing about lessons planners could learn from Canada. My recent trip showed me North American cities that have done a better job of managing their urban fabric than is typical south of the 49th Parallel.

After Montreal, a short stop-over in Ottawa was in order. Spending just under 12 hours in Canada's capital city was not much time to explore, but it was enough time to see the main sights. Parliament was particularly impressive. It's siting is also an example of good planning, on a bluff overlooking the Ottawa River.

But I want to focus this planning discussion on a different aspect of Ottawa.

My recent post on Montreal focused on large greenspaces, which are essential to creating a vibrant urban environment. Just as important are green corridors linking small and large greenspaces and knitting the city together.

Ottawa's Rideau Canal fits this role nicely. Completed in 1832, it was built to defend Canada from a potential attack by the United States. The waterway is 125 miles in length, connecting Ottawa to Kingston, on Lake Ontario. Only about 12 miles of the route was man-made, the remainder of the journey is made using rivers and lakes. 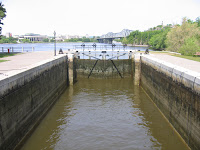 The locks at Ottawa with the
Gatineau Bridge in the background
One can still traverse the canal today. It is run by Parks Canada, which charges a small fee to operate the locks along the journey.

Through Ottawa, the canal is the centerpiece of a greenway which connects neighborhoods to the city center. Flanked by multi-use trails, it is a wonderful linear greenspace. In the winter, the canal becomes one of the world's longest ice skating rinks, and people from Ottawa will commute to work by ice skate. 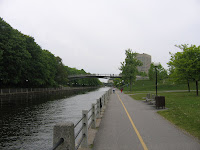 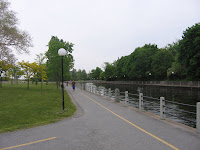 The waters of the Rideau Canal
are flanked by ped/bikeways
Connecting parks is important to ensure that everyone has access. They can also become alternative transportation corridors, as is clearly the case with the parks along the Rideau. And while Ottawa is certainly doing a good job in this corridor, Washington is also doing well.

Here in the Metropolitan Washington Region, we have several good green corridors. Most notable are the C&O Canal and Rock Creek Park. 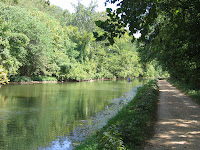 The towpath parallels the
calm waters of the canal
The C&O Canal is similar to the Rideau. From Georgetown, the canal runs up the Potomac in a mostly forested setting. Because it is down in the Potomac Valley, there aren't too many communities directly on its path, and access is more limited than it is to the Rideau.

The setting, however, is beautiful and offers a wonderful way to escape from the city when one needs a breath of fresh air. The canal offers an glimpse of a slower time and a more bucolic America. 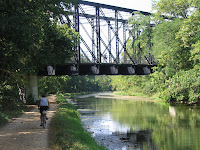 The Capital Crescent Trail crosses
over the C&O on an old railroad trestle
Today, like the Rideau, the C&O Canal provides an alternative transportation corridor. Bikers and joggers use this sylvan corridor to get exercise or to get to jobs in the District. 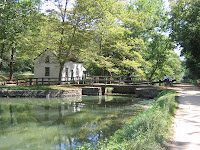 A lock along the C&O
Another good example of a green corridor is verdant Rock Creek Park. I introduced Rock Creek Park late last year on Track Twenty-Nine. Linking the National Mall to Rockville in suburban Maryland, this large park also provides a place for recreation and transportation in DC and her suburbs. 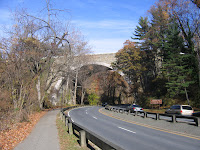 Massachusetts Avenue crosses over
Rock Creek Park and the Parkway

These examples, in Canada and Washington, offer a glimpse of how planners can best link our urban greenspaces. Corridors like these leverage our greenspaces and we should do more to encourage their construction.
Posted by Matt' at 10:54 PM