A Waste of Energy 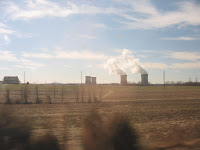 It's still really too early to start reviewing the platforms of our presidential candidates, in my opinion. However, last week had both candidates talking about energy and I think the discussion is worth bringing up here.

I believe that the single most important issue facing this country right now is Energy Policy. While I mention energy quite often in this forum, I am, as you know, primarily focused on transportation and urban growth issues. These, while worthy of their own discussions, are really a subset of energy policy and they merit discussion by the candidates.

At this point in the election cycle, the candidates are still firming up their positions, and certain aspects of their policy goals may change (as happened last week), I will probably look back over energy later in the campaign along with other policy areas.

Right now I am very disappointed. I understand that people running for public office have to first be elected before they can influence policy, and that sometimes they have to be soft on certain issues in order to win.

At the same time, I feel that Americans need some straight talk from our public officials and candidates. Many here have been living the American (pipe) Dream made possible by cheap oil and bad policies in the post-war era. They regard the recent energy shocks as light turbulence. It's time for the captain to interrupt the in-flight movie, however. We haven't gotten to the point where we deploy the oxygen masks yet and if we act soon, we might not have to; however, if we continue to pretend that it's business as usual, we will soon find ourselves in an even worse predicament.

That's why I was proud of Senator Barack Obama for calling out Senators Clinton and McCain on their suspend-the-gas-tax proposal. Not only would suspending the gas tax not lower gas prices, but it would also increase consumption and hasten the date of crisis, but the suspension would also forfeit $1 billion in revenue. Incidentally, just two weeks ago, the US Department of Transportation announced that the highway trust fund is going to run out in October due to lessened gas tax revenue from the drop in demand. I'm certainly glad that we didn't forgo that revenue; we would have run out even sooner.

But the Junior Senator from Illinois is beginning to seem less prescient. The New York Times reported last Tuesday that Obama has proposed releasing oil from the Strategic Petroleum Reserve and has softened in his opposition to offshore drilling.

The quandary for progressive politicians like Senator Obama was pointed out by the Washington Post's cartoonist, Tom Toles, on July 30th. In his cartoon, two Uncle Sams are sitting on a see-saw. One is trying to reduce global warming, the other is trying to reduce gas prices. For some strange reason, the see-saw isn't moving in either direction.

Senator Obama is under extreme pressure to reduce gas prices, and their height is certainly a major problem for most Americans, but as we are seeing, the market is causing them to drop as we speak. As of August 10, CNN was reporting that gas was down for the 24th day running. CNN also points out that the drop in oil prices is a mixed blessing, blaming the drop in prices on reduced demand due to the recession. According to the article, the drop in May was the third largest drop in prices since 1942.

But despite that pressure, I had hoped that Mr. Obama would tell Americans what they needed to hear rather than what they wanted to hear. Still, it's not all bad. Mr. Obama has many progressive elements in his energy policy, and while I disagree with a release from the Strategic Petroleum Reserve, his policy is still much better than maintaining the status quo as proposed by Senator McCain.

The esteemed Senator from Arizona wants to increase off-shore drilling of oil--a move which wouldn't have an impact before 2030, and whose benefits would not significantly reduce the price or be long-lasting, according to a report by the US Energy Information Administration.

The only way America will be able to permanently solve its energy problem is by reducing its demand for fossil fuels. The only way we will get Americans to reduce their usage (demand) is to use market forces, which means that in the long run, high gas prices are better. Even Time Magazine has pointed out that high gas isn't all bad.

So, to compare the candidates:

Addendum, 11 August, 9:45 AM:
Thomas Friedman wrote an op-ed
for the New York Times which was published Saturday. I just discovered it this
morning. It's certainly a more concise way of saying what I've said over several
posts here. It's well worth a read.