As I've pointed out recently, this blog is celebrating one year and this celebration marks my one-year anniversary of living in Washington as well. This year has been a year of change for me. Since last August, I've started graduate school, lived in Maryland and the District of Columbia, and begun to explore my new home region.

It has been quite an adventure.

Since the Metro map is one of Washington's most recognizable symbols, I've decided to use a modified version to illustrate where I've been in the city. Metro has 86 stations, which is quite a lot when you think about it. My last home was Atlanta, where MARTA has only 38 stations. It took me almost 4 years to "use"* every MARTA station.

*I define use here as having entered or left the faregates at a station. It's
not enough just to ride through or even get off and walk around the platform.

Ironically enough, the last station I used on MARTA was Medical Center. It's ironic because that station is closest to by birthplace, Northside Hospital (of course the station didn't open until 11 years after my birth). It's also fitting because I haven't yet used the Medical Center station here in Washington. Perhaps I can save it for last.

But while it took me the better part of 4 years to use the 38 MARTA stations, I've already used 56 stations here in Washington. But I still haven't covered all of the line segments. I've never ridden the Green Line south of Southern Avenue and I have yet to go beyond Rockville on the north side of town. Riding the entire MARTA system was one of the first things I did after moving to Atlanta. It was also one of the first things I did when living in Munich, but I suppose I just haven't had a chance. After all, WMATA's 106 miles of track certainly dwarf MARTA's 48. 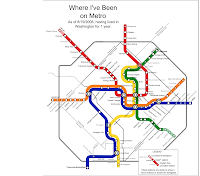 But while my explorations of the areas around 56 of Metro's stations have been many and varied, my explorations beyond its reach seem woefully inadequate. Being carless has trapped me inside the Beltway for the most part, it seems. Having a bike helps--indeed it is one of the sources of a couple of visited Metro stations. I once biked from Rockville to Foggy Bottom and also from Southern Avenue to Bening Road, but I've yet to venture up to Great Falls.

So I suppose the long and short of it is that while I've certainly seen a lot of Washington in my year here, I sometimes feel that I haven't even scratched the surface.

How do your adventures compare?
Posted by Matt' at 2:25 PM

I've never been past:
Wheaton on Red
Rockville on Red
Eastern Market on Blue
Eisenhower Ave on Yellow
Navy Yard on Green

I've only been to 52 stations.

Also I have no idea how you've gotten off at Virginia Square but never Clarendon... ?????

Simple. I've walked from Court House to Virginia Square. But I've never had the need to get off at Clarendon. Yet.

I've been in the area awhile but was in Arlington and Tyson's most of the time. It's still more efficient to drive to MD from many spots in VA than to ride metro downtown and transfer. Also certain suburb stations are park and rides and don't offer much reason to use for non-commuters or locals.

I second Chris' comment that its odd to get off at VA Sq. and not Courthouse -- haha.

Besides Clarendon is a great area :)

Do we want to know WHY you got off at some of those stations?

I live in Atlanta now, and it's sad how the city hasn't incorporated MARTA into its planning. You wouldn't even know most of the stations are there... they aren't incorporated well into the urban fabric. It's a more extensive system than most cities have, but it's viewed more as a joke by the public at large. When I say "let's take MARTA", people think it's a joke, seriously.