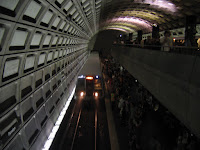 Track Twenty-Nine is ready to make a projection:

January 20, 2009 will be Metro's highest ridership day ever.

*Don't forget to vote in my new poll*

Before this summer, the highest ridership date had been set by mourners at the Reagan Funeral. On that date, June 9, 2004, 850,636 rides were taken. This date is currently the second-highest.

According to DC Mayor Adrian Fenty, the District is expecting between 3 and 5 million visitors to see Barack Obama's swearing in and the inaugural parade. This is unprecedented. So far, the most popular inauguration was Lyndon Johnson's in 1964, when 1.2 million citizens came out to watch. If Fenty is correct, we could see 3 times as many people this go 'round.

And the region is bracing. WTOP reports that Metro is having an all-hands-on-deck day, with every piece of available equipment ready to move passengers through the city.

Based on my experience, Fenty's projections are not unreasonable. Everyone I know has fielded calls from people looking for a place to stay. (Sorry dear readers, I'm already putting up 4 people, so I can't help you out). Even CNN commentator Donna Brazile has written about this phenomenon. People are coming with tickets or without, and hotel rooms in metropolitan Washington are booked. Yes--all of them. I hear that Baltimore and Richmond are already filling up, too.

Some are cashing in on the opportunity, and I don't blame them. But friends come first, so I'm putting my guests up for free. And I'm going down to the Mall with them to be a part of history. You know, even if I can't hear President Obama take the oath, I think it'll be worth it. I can always watch the rerun on C-SPAN when I get home.

I've put up a new poll. What do you think? Will WMATA surpass ridership records?

The prior poll asked about your plans for the Inauguration. Here are
the results:

**Update:
After writing this, but before submitting it, I recieved a press release from WMATA. They have already announced their plans for the Inauguration, and will run continuous *rush hour* service from 4am-7pm on January 20th. The system will be open from 4am-2am on that date.

The Post is now reporting that WMATA expects 1.6 million rail riders on January 20th. This would *double* the current ridership record.

Metro has very few qualified managers. The managers I know have been addicted/positive drug tests.

I believe that a Govt. Oversite Committee is urged to reinterview all managers and have managere reapply for their jobs.

Many are promoted into positions who are wives, friends members of the same lodge (masonic), and or have a felony conviction.

I believe the public should know the truth. Managment is not qualified. Some shops have no supervisors. Products are released with receiving safe standard approval.

Help managment by intervening someone.