Are All Transit Investments Created Equal? 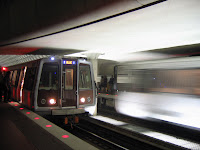 Like all policy decisions, transit investments are made based on an underlying set of values and objectives. The way those objectives are interpreted and addressed can mean vast differences between alternative solutions to perceived problems. Therefore, in order to assess the quality of a transit proposal, we must first assess the foundation upon which transit decisions are made.

As the population of America's cities continues to increase along with congestion and oil prices, an ever greater number of commuters and cities are choosing to make investments in transit. Cities like Washington face a dilemma about where to make transit investments and what kind of investments they should be. Should the primary purpose of rail planning continue to be an emphasis on suburb to central city commuting, primarily in the form of large park and ride facilities on radial rail lines? Or should precious federal dollars be spent on transit projects in an effort to rejuvenate older urban areas?

Recently, much emphasis has been placed on congestion relief as the primary goal of transit. Unfortunately, this goal is one which cannot be achieved. No matter how much additional transportation infrastructure is constructed--or even what mode--congestion will never be eliminated. This failure, however, is nothing to fret about. Congestion is merely an economic phenomenon that occurs when demand exceeds supply. It is neither practical nor feasible to construct enough highway lanes to handle rush-hour demand. In the face of this realization, planners are doing what they have been doing for many years; using freeway medians as a means of penetrating the urban core, attracting riders from their cars, and providing an alternative to sitting in traffic. 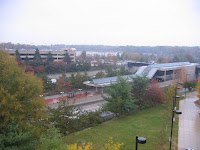 This strategy has certainly been successful in some regards. In , where Interstate 66 is host to severe HOV restrictions and permanent width restrictions, the median-running Orange Line has proven extremely popular with commuters. Even so, it seems a bit dubious to site a transit line on “highway’s turf” as Paul Farmer, head of the American Planning Association, so aptly puts it. In November’s edition of Planning, Mr. Farmer outlines some of the problems with using freeways as a means of penetrating the urban core. 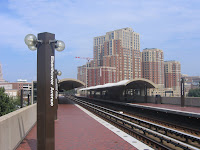 Freeways are not typically characterized by dense multi-use nodes. ’s Orange Line is no exception. Interstate 66’s stops are mostly places for commuters to park, rather than live, work, and play. This is in stark contrast to the dense urban neighborhoods which have sprung up around stops in , Rosslyn, and Ballston. The transit oriented development at these nodes is not coincidental. Neither is the lack of transit oriented development where the car is king.

Of course, the tradeoff is that transit takes cars off the road—and leaves room for others. For every commuter that parks at , there is room for one more to fill a space in the traffic jam. The concept is called “induced demand,” and it illustrates one more fallacy of placing trains in freeway rights of way. The idea that transit or road building can reduce congestion is a myth. Only demand-side techniques can permanently reduce congestion. Demand-side techniques include congestion pricing, lane management, and transit oriented development.

Citizens in growing Tysons Corner are trying to harness for themselves transit’s power to reshape the urban—or in this case, suburban-fabric. The Washington Post reported today that activists there have filed a lawsuit against the federal government for foiling the Silver Line’s chances to be constructed underground. Whether subways are more likely to inspire transit oriented development than elevated ones is not clear, however, Tysons chances are greatly improved with transit than without. Of course, some areas are more likely than others to develop the dense nodes that the people of Tysons envision. If anything damages Tysons’ chances to become the Bethesda of Fairfax County, it will likely have more to do with the presence of two major freeways than elevated stations.

Another problem with freeway-running transit lines is that they enable further sprawl to accrue on the periphery of our metropolitan areas. Instead of incentivizing the redevelopment of the central city, auto-oriented transit just allows some commuters to bypass congestion and still lvie in the sprawling hinterlands. While suburban development is not necessarily bad, one must wonder if choosing an auto-oriented locale is the best place for a transit investment. A better strategy for transit would be to invest in communities where household car ownership is low and places which are ripe for redevelopment. Of course, parking and riding will continue to serve as a major source of transit users, but transit lines should still be routed away from freeways for maximum success.

In the Washington area, an example of good transit routing is the Red Line. The suburban terminus of the line is at Shady Grove. The Shady Grove station is close enough to Interstate 270 to allow convenient access for commuters from the suburbs. The line, however, is far enough from the freeway that dense, multi-use nodes can germinate along the line as it runs under Rockville Pike, Wisconsin Avenue, and Connecticut Avenue. These nodes create demand for transit by being centered around it and by providing a mix of uses. The Bethesda Station, for instance, has many jobs drawing Metro riders from the suburbs and from the city proper. It also has housing, which contributes commuters to the subway not only during rush hour, but also during off-peak times, due to the convenience of transit in this node.

If the car is harmful to the urban fabric, then the freeway is toxic. Transit investments can be and have been used to improve cities, but freeways make that extremely difficult. At least in Tysons, the proposed Silver Line has been routed away from the and through the center of the burgeoning business district. Still, one can only hope that those in charge of transportation decisions begin to realize the impact that “congestion mitigation” is having on our cities.

Not all transit investments are created equal. If our policies have any hope for success, they’ll need to follow the advice of Paul Farmer and keep transit in areas where it has a better chance of working. In the face of the looming energy and environmental crisis, we must decide whether transit will serve as an enabler for auto-centric, suburban lifestyles or as an incentive for pedestrian and community friendly traditional neighborhood development. The decision is far from clear-cut, but more consideration must be given to the environs with which we choose to surround transit—these surroundings will either enhance or blunt the ability of transit to reshape our metropolitan regions. There is no better time to reassess the underlying assumptions of our transportation policies than now.

"The line, however, is far enough from the freeway that dense, multi-use nodes can germinate along the line as it runs under Rockville Pike, Wisconsin Avenue, and Connecticut Avenue."

Good article, and excellent use of the word 'germinate'. Keep up the good work!

I really liked your blog and would like to know more about the topic
buy viagra
generic viagra
thank you very much..