Putting the 'anta' Back in Atlanta 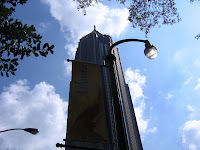 Thank God that someone had the foresight to give my former home a beautiful name. I think that "Atlanta" seems to just roll off the tongue. It is a beautiful name for one of America's great cities. It is a name that Atlantans should cherish. After all, it could be much much worse. What if the name hadn't been changed? Terminus just doesn't sound like the name of a city with any sophistication. Marthasville brings to mind the picture of a little mountain hamlet with no more than a flashing red light.

But instead what do people do? Instead of using this beautiful name, the feminine form for the name of an ocean 250 miles away, they refer to their city with the blunt IATA code for the airport.

Of course, using abbreviations to refer to places is nothing new. Up here, we call Washington 'DC' all the time, but that does make it considerably shorter. Especially since just saying Washington results in a sentence explaining that we mean the National Capital and not the state, one of the 25 incorporated places, or one of the 31 counties of this name.

Pennsylvanians also have plenty of reason to shorten their references to just P-A. You'll find them driving on the P-A Turnpike and buying tickets for the P-A Lottery. Still, that's another one of our beautiful names that ought to be used in its entirety as much as possible.

At least the aforementioned places actually shorten their names, though. With 'The ATL,' users are actually making their nomenclature longer. Atlanta only has three syllables, 'The ATL' is four. If you include the space, they are the same length, so writing and typing also yield no benefit. Plus, with 'The ATL,' one has to hold down shift for three extra letters.

Let's stick to the name folks. After all, who refers to Chicago as 'The ORD?' What about New York? There it's NYC, not LGA. In lots of places, use of the IATA airport code refers specifically to the airport. Take Miami (MIA) and Denver (DIA), for example.

So let's stick to the full name. It's a nice one, and trust me, Atlanta needs all the help it can get.
Posted by Matt' at 11:43 PM