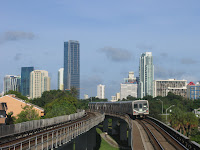 Well, I'm back from Miami and Railvolution was a blast! Miami-Dade Transit and the South Florida Regional Transportation Authority were excellent hosts. While the conference was held in South Beach, far from the nearest Metrorail Station, the Art Deco facades and sea breezes made Railvolution a nice way to take a break from the hustle and bustle of Washington.

The conference was informative and full of great information. From talks on how transit can help save the environment to discussions on the use of rail to revitalize communities, Railvolution 2007 fostered a discussion on everything transit. The highlight of the conference for me was the tour of the Miami Metrorail. We even got a sneak-peek inside the Metrorail and Metromover Central Control Center. I can't wait for Railvolution 2008 in San Francsico! I hope I'm able to go, because I love the Bay Area. After all, I did leave my heart there.

Part of the conference focused on our host city's efforts to expand transit in the region. As we were told, South Florida is a region "ripe for rail." Squeezed in to a narrow corridor between the Everglades and the Atlantic, Tri-Rail offers a growing commuter rail service. The Metrorail has plans to construct major extensions, including a branch to the Miami Airport. Transit Oriented Development is also progressing nicely around such stations as Santa Clara and Dadeland South. Of course, as speakers at the Railvolution Conference reminded us, there are battles yet to be fought.

Soundly Voting for Transit
Tuesday marks a major day for transit, with two votes on the subject in vastly different regions. Seattle voters will be seeing transit on the ballot tomorrow. Sound Transit, which operates light rail in Tacoma and commuter rail in the Tacoma-Seattle-Everett corridor, faces a potential windfall with region voters deciding whether to appropriate $10.8 billion for 50 miles of light rail and an additional $7 billion for roads in the region. Sound Transit is currently constructing the Central Link Light Rail connecting SeaTac Airport to downtown Seattle's revamped Third Street Subway (formerly bus only). The next step, the University Link, serving U-Dub is in the planning stages. This proposal will extend the line north to Lynnwood, south to Tacoma, and east across Lake Washington to Overlake. It comes at the expense of also adding roads across the region, but the improvements are worth it. Let's hope that when the polls close tomorrow, Seattle will finally be getting the transit system that it has been planning since the early 1960s.

And in Charlotte, CATS might not be as afraid as a Lynx in a room full of rocking chairs (to mince euphemisms), but its funding source is under attack. Tuesday, voters will decide whether to confusingly vote no for transit or yes against transit. A yes vote will mean the repeal of the 1998 referendum which forked over a half-penny to transit. Let's hope that a no on Tuesday will mean a good opening for the first opening of Light Rail in North Carolina later this month. Charlotte will be starting service on its Blue Line, the first phase of the Lynx Light Rail System. If Charlotte decides to keep the transit tax, the region can look forward to 36 additional miles of light rail, 13.5 miles of bus rapid transit, and 16.5 miles of streetcar. Once again, we can only hope that the railvolution will continue as places like Charlotte keep up the good work.

And how the railvolution has indeed been progressing. Tri-Rail in South Florida recently completed double tracking its route, allowing for increased headways and capacities. Maryland's Governor, Martin O'Malley, has committed the state to funding a tripling of MARC service over the next 25 years. San Francisco's Muni opened its new T-Third Street Line serving along the western edge of the San Francisco Bay. In October, the FTA agreed to their commitment to partially fund the first phase of Norfolk's Tide Light Rail, which will open to passengers in 2010. On the whole, transit ridership is up and so is support for transit. The railvolution seems to be working, and I'm sure its successes will be televised.
Posted by Matt' at 11:40 PM