A Rainy Night In Georgia 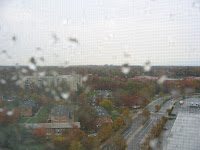 Georgia is in the midst of one of the worst droughts on record. In late October, when I changed planes in Atlanta, the Atlanta Journal-Constitution was reporting that Atlanta had 80 days of water left. This problem was foreseeable, yet no action was taken by state or local leaders. This city has had one of the fastest metropolitan growth rates in the country basically since air conditioning was invented. Projections call for almost 3 million people to move to the metropolitan area by 2030, an increase in population of 75%. If Atlanta doesn't have enough water now, though, how can it expect to survive once a population surge the size of Seattle moves in?

Well, the good news now is that Georgia's two term Governor, Sonny Purdue, has the answer.

Wow. I'm surprised that no other politician has thought of that one. Too much congestion? Pray about it. Poll numbers too low? Pray about that too. Jackets going into the annual Georgia-Georgia Tech rivalry with a high ranking? Sure, might as well ask the Almighty to intervene in Football. At least divine intervention in sports doesn't violate the laws of nature that messing with the weather would.

After the prayers, the rain

By SAEED AHMED
The Atlanta Journal-Constitution
Published on: 11/14/07

When his hour-long prayer vigil for rain ended with the sun shining through Tuesday, Gov. Sonny Perdue made a bold proclamation.

"God can make it rain tomorrow," he said.

Just like Perdue — and the National Weather Service — said, it was a rainy night in Georgia on Wednesday.

The rain was triggered by a cold front coming through, and it was expected to last until the early hours of Thursday morning.

Did Purdue's pleas to the almighty make a difference? Probably just in his poll numbers. A more appropriate question would inquire whether Georgians are finally tired of Pandering Purdue. It's easy for the Governor to hold a 'successful' prayer vigil. He just looks at the 10 day forecast, calls a prayer vigil, and then celebrates a 20% chance of rain the next day.

Who lost weight as Governor?
Who set back transit in Georgia by at least 5 years?
Who created a pointless second ban on gay marriage?
Who did nothing about the water shortage except pray for rain?

If Mr. Purdue is so keen on holding an office where he gets to pray about things whose processes are already set, maybe he should run for Deacon. Because it won't help in getting things done (only getting elected), because praying that the junior Senator from Indiana will co-sponsor your bill won't really change his mind.