One thing that Washingtonians know is that it's often easier to take Metro. And for the most part, I think they're right. However, Metroing around has its limitations--especially after dark. The system is one of the first heavy rail systems in the United States to close every evening, and it is the first to start closing (unless you count CTA's Skokie Station).
Of course, WMATA is a chronically underfunded agency with many unmet needs. Still, it would seem on the surface to be essential for the subway to stay open late in Our Nation's Captial. While it is true that Washington has long held the distinction of being known as an early-to-bed, early-to-rise sort of town, they don't exactly roll up the sidewalks at 11:30. They do start rolling up the Metro, though. They start shutting it down at 11:24 every evening Sunday through Thursday.
And while the party-goers and clubbers have the benefit of an extra 3 hours of service on Fridays and Saturdays, this strategy leaves out the idea of equity. After all, it's not just clubbers who are out after midnight. All of those service workers have to get home somehow, and many of them don't get off until late. Besides, do we really want to be known as the city that has the first subway to retire each night? Even Baltimore's Metro starts to close later than WMATA.
Let's have a look at the data. I created this bar chart to illustrate the service periods of America's 13 heavy rail systems. They are shown (from top to bottom) in ascending order of first last train. So, for instance, Washington has the first last train of all the systems, when the train bound for Greenbelt leaves Branch Avenue for the last time each weekday at 11:24. The three bottom-most systems don't close at all (although service patterns are different late at night) and Chicago keeps its Red and Blue Lines open all night. 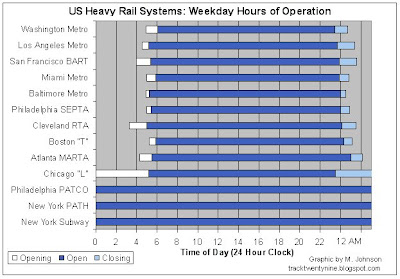 Most people agree that it would be better if Metro stayed open later--at least to a certain point. There seems to be little incentive or need to have trains running at 3 in the morning, but 12:30 doesn't strike me as unreasonable. Of course, Fridays and Saturdays tend to see demand for those really late night trains and when WMATA suggested cancelling them last year, there was a good deal of outcry.

But what about the rest of the week? Where is the outcry then?
When I flew back from Vancouver (via Atlanta), I was subjected to weather delays. My flight pulled up to Gate 21 at National at 11:34 PM. I had just 10 minutes to get off the plane, clear the terminal, buy a farecard, and run up an escalator. I made it--with 4 minutes to spare. I don't know how. I might have broken some laws of physics to do it, but I wasn't about to sell my firstborn to pay for the cab ride to Prince George's Plaza. The fact of the matter is that 11:44 is far too early to stop inbound service on the most direct route from the Airport to Downtown.
In Atlanta, where the airport is not only a major visitor/resident destination, but also a major job center, the last train leaves at 1:00 AM sharp. Sure, it takes until 1:43 to get to Doraville, but I never had to worry about missing the last train, and while the train was never at crush, there is a lot that could be said about the benefits of mobility--and having a system that meets the needs of people other than suburban commuters is an essential aspect of a world-class transit system.
Of course there are larger issues at stake. It often seems that the only constants in Washington are humidity and a transit system with a perpetual funding crisis. (Which is funny, because I could say the same thing about Atlanta). And I certainly would not argue in favor of later service in the evening at the expense of rush hour service. And if we aren't cutting expenses somewhere, that means more outlays for operations. So what kind of money are we talking about here?
Well, the exact number isn't clear. According to WMATA, they charge venues $21,000 per hour to keep the system open late for special events (think evening Redskins games). It so happens that if a certain ridership threshhold is crossed, the venue gets their money back, and it's not uncommon for these events to keep the system open. So if we wanted the last train to leave Branch Avenue an hour and a half later at 12:54 AM, it would theoretically cost about $30,000 per day. That's $150,000 per week or about $600,000 over a month.
It's not quite that simple, though. While these are all back-of-the-napkin sorts of calculations, a permenant or long-term extension of service in the evening would likely come with a readjustment of bus services and the like, so it could wind up being slightly more expensive.
But of even greater concern to Metro is when they would do their maintenance. We all know what happens when Metro defers maintenance, and it isn't pretty. And 90 minutes less time to upgrade and repair tracks and stations is not a trivial amount of time. Still, other systems manage to do it. 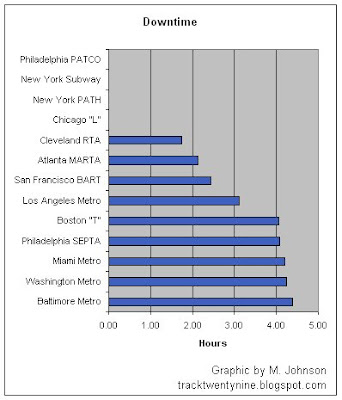 The early closing time of Metro does not seem to jibe fully with the maintenance argument. While WMATA is in the same league as some of the systems in terms of downtime, it is quite different from its peers. San Francisco's BART is 4 years older, MARTA is 3 years younger, both have less than 2.5 hours to do maintenance. The more extensive systems (Metro is second in distance, behind NYC Subway and just ahead of CTA) tend to have less downtime--none actually.

The point is that if Metro really wanted to extend service, it would be possible. Systems just as lengthy and of a similar era make do with less time for repairs. In some cases, notably Chicago and New York, places where the subway doesn't sleep, the maintenance issues are far more pronounced than Metro's. Chicago has more slow zones than you can count on all your fingers and New York's system faces the same sorts of problems that all centenarians face.

The maintenance issue is a non sequitur. Even if the maintenance that needed to be done was on a crossover, trains could still operate at 20 minute headways, which is just about right for late evenings. When switch work several weeks ago disrupted Green and Yellow service at Mount Vernon Square, trains operated every 20 minutes through two interlocking segments. Besides, Metro already does maintenance at night, often well before service ceases, but after passenger volumes have fallen off.

With high gas prices strangling the economy and a resurgence of interest in urban living, it is time for Metro to make significant improvements to its service. Later service is one step that can be taken. Even adding 30 minutes of service would be a considerable achievement for this, America's finest of subways.
Let's hope that soon Metro will be Opening Doors later and leaving the light on for a broader spectrum of riders.

What are your thoughts?
Posted by Matt' at 6:52 PM

Matt, I disagree with you on staying open later. Of the three 24 hour systems you noted, TWO have unstaffed stations. One PATCO is a one line system that basically operates with three folks (not counting security and maintenance) late at night (two train operators and one person in the control center). Metro has so many stations and all of them are manned. On top of that Metro has a policy of keeping a high number of police on duty during late night hours to deter crime. On top of that the late night hours on weekends means that all the maintenance instead of gettign done at night (at one point the system closed at midnight and opened a 8 am on Saturdays and 10am on Sundays providing maintenance windows) gets done on the weekends disrupting the commutes of folks so some can party late at night.

As the area matures what it needs a network of night owl buses like they have in Toronto and many major European cities including London and Amsterdam. These buses may skip some stations and stop within a couple of block of other stations to keep their routings short but they would provide a viable alternative to keeping a system that requires 75 people just to staff the stations open.

Rather than worrying about the high cost of keeping the entire system open, DC should follow Chicago's lead (in both idea, and incidentally, in colors) and just keep the Blue and a modified Red line (ending at Grosvenor, similar to every-other-train during rush hour) open later? This would serve the airport, Union Station (which also has late night arrivals,) all 4 quadrants, and make cabs more amenable for folk traveling farther out into Virginia and Maryland. When maintenance absolutely requires closing one of them, it maybe possible to to substitute the yellow or orange line--it wouldn't serve Maryland quite as well, but would certainly be better than nothing.