Feeling Blue in the Mid City 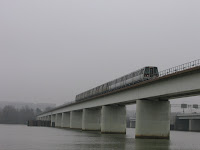 Metro announced that a proposal is being put before its board of directors to decide about a potential adjustment of subway service. The proposal has been being kicked around for some time now, and a decision is expected later this year in regards to the Blue Line.

the proposal would send some (just under half) of peak period Blue Line trains from Franconia-Springfield to Greenbelt by way of the Yellow Line's Potomac crossing. The realignment would shave around 8 minutes off of a trip between Franconia-Springfield and L'Enfant Plaza and would increase rail service to the burgeoning east side of Downtown. Unfortunately, it would also decrease frequencies for trips being made from Alexandria to Rosslyn and the busy stations at Farragut Square and Metro Center.

The Washington Post's Dr. Gridlock opines in his blog (scroll to 2/11/08-9:11 AM) that this controversial change will instigate a spirited discussion among commuters. He is, without a doubt, correct. However, as an article in today's print edition points out, Metro has little choice in the matter. Rosslyn is the worst bottleneck in the entire transit system and with ever-growing ridership on the Virginia end of the Orange Line, eight-car trains are already full. At the moment, adding trains is out of the question because the junction at Rosslyn is operating at 100% capacity, with a train every 135 seconds (inbound) during the AM peak.

Assuming that the Silver Line is constructed to Tysons and Dulles, the problem will be exacerbated even further. If and when the Silver Line opens, the rerouting of the Blue Line is almost assured. With trains running from Loudoun County to Stadium-Armory, congestion at Rosslyn will be even worse, especially without reducing frequencies on the Blue Line at Rosslyn.

The change would not result in a reduction of service at Rossyln, however. Each Blue Line train rerouted to Greenbelt (4 per hour) would make room for an additional Orange Line train. Additionally, in order to maintain existing service levels on the Largo Branch of the system, Orange Line trains would alternate between New Carrollton and Largo. Under this proposal, the only station which would see increased headways is the little-used Arlington Cemetery, where wait times would increase from 6 minutes to 12 during rush hours. 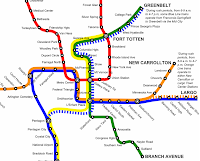 According to Metro, because the switch at Rosslyn would not have to be realigned as often, some additional capacity will be gained with the Blue Line's detour. In addition, because less reliance is being put on this bottleneck, reliability throughout the system will be increased, and delays are less likely to spread to other parts of the system. The change comes at no additional cost to Metro, since the route miles are virtually the same.

Still, the fact that this change is required brings to light bigger problems at Metro and with transit in general. Several years ago, a proposal to construct a new Blue Line subway under M Street was killed due to cost concerns. With increasing ridership and ever-fewer FTA dollars, new heavy rail construction is essential. This is a topic I hope to cover later in a new section of my blog devoted to showcasing potential transportation projects. In the meantime, let's hope Metro can find a way to get even more commuters through the Blue/Orange subway.

*WMATA's board is supposed to vote in June on the proposal, after a period of public comment.

I'd like know what you think of the proposal, please leave a comment.
Posted by Matt' at 12:58 PM