Have We Driven the Golden Spike Yet? 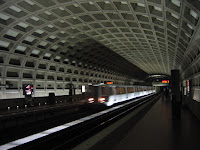 I don't think so.

On May 10, 1869, the final spike was driven on America's transcontinental railroad. Since that date, the driving of a golden spike has long signified the completion of a railroad.

Many people in this administration believe that we have completed our nation's transit system. The believe that no further work is necessary, even though several major American cities still have no rail transit infrastructure. For the Bush Administration, however, the golden spike they wish to hammer in place is not to complete a railroad, but to put the final nail in the coffin of transit expansion, as it were.

Earlier this month, Progressive Railroading reported on the Bush Administration's attempt to transfer (steal) money from the transit trust fund. Apparently Mr. Bush wants to reduce the amount of funding for transit well beyond the point of no return. This action, unfortunately, is unsurprising. The White House has rarely shown an interest in alternative transportation since 2000; and it seems that when Bush said he wasn't a "nation-builder" he meant that he wasn't going to help build America anymore. Due to inflation the federal gas tax has been becoming less and less effective at meeting our nation's needs.

Now, instead of doing the manly thing and admitting to the American public that infrastructure investments need to be made and paid for now, Mr. Bush is taking the easy way out. He is stealing from America's future to pay for his political popularity--even though it's too late for him anyway. The fact of the matter is that someone's generation is going to have to write the check to cover Mr. Bush's spending spree, and I'm afraid it's going to be mine.

So I think it's time to reconsider the notion taken as fact by many transportation planners that major heavy rail (and other types too) expansion is at an end. If America is to become a sustainable nation in the future, we are going to have to make significant investments in transit infrastructure. Every American city needs more transit, though some are worse off than others.

At the moment there is little money for transit expansion, but I am confident that that will change with changing political realities. Therefore, I'm taking suggestions on proposals for Washington. What will the transportation future look like here?

If you've got ideas add them as a comment. I'll be following up this post with posts outlining some of my ideas, but I want this to be a broader forum too.
Posted by Matt' at 5:02 PM