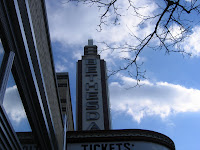 The section of my blog, Introducing Washington, has gotten off to a rather slow start, but now that I'm back from break the weather can only get warmer. Last weekend I had a chance to explore Bethesda, and I've decided to write this installment on the well-known Washington suburb.

Bethesda takes its name from the Bethesda Presbyterian Fellowship which was built along a former Indian path in 1820. The path was improved to carry tobacco from Frederick to Georgetown and is now known as Wisconsin Avenue/Rockville Pike. 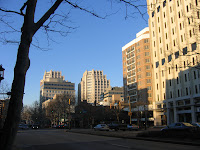 Perhaps the largest boon to Bethesda came in the Summer of 1984 with the opening of WMATA's Red Line to Grosvenor. Passengers from the subway station spill out onto the corner of Wisconsin and Old Georgetown, the center of Bethesda. Here, office and residential high rises dominate the cityscape. The density rapidly drops off, however, as one moves away from the Metro. Within blocks, one can encounter the serenity of quiet single-family neighborhoods. 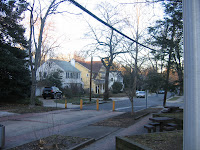 One landmark near the center of this urban district is a monument to days past. The Madonna of the Trail, erected by the Daughters of the American Revolution, stands to memorialize the spirit of pioneer women. This statue stands in stark contrast to the gleaming office buildings surrounding it. The one on Wisconsin Avenue is the easternmost of 12 of these monuments, which stretch along Route 40 to Upland, California. They were constructed because of the nature of Route 40 in opening up the country. On a side note, I discovered that one of these monuments also stands near my father's hometown of Washington, Pennsylvania--small world, eh? 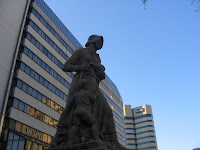 Bethesda is perhaps known best for its affluence. According to the Census of 2000, it is the most educated city in the United States. The median household income is just under $100,000. Only 3.3% of the population is below the poverty line. The area within 1/2 mile of the Bethesda Metro stop has almost 36,000 jobs, giving it the highest employment concentration of any Maryland WMATA station. The same area has a population density of 8,600 persons per square mile, almost 4 times the density of Montgomery County as a whole. 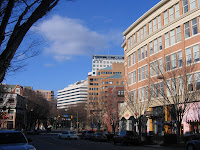 Another selling point of Bethesda, as it were, is the number of restaurants. While I don't have any hard numbers, the area has a reputation for variety and quality when it comes to eateries. One could spend a week in this neighborhood and not scratch the surface when it comes to restaurants. Dining options and shops line Wisconsin Avenue and other major and minor streets alike. Woodmont Avenue is a particularly good street for people watching and window shopping. 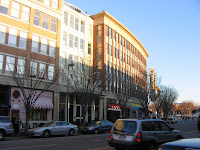 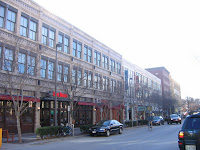 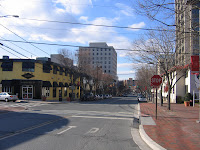 Another asset for this community is the Capital Crescent Trail (the section between Bethesda and Silver Spring is known as the Georgetown Branch Trail). The trail stretches from Georgetown, DC to Silver Spring and is very popular among joggers and cyclists alike. At present, the Maryland Mass Transit Administration has hopes to build a light rail line along the section of the trail between Bethesda and Silver Spring. Ultimately the line could serve as a circumferential rail line encircling Washington, but at the moment, the proposal only takes it from Bethesda to New Carrollton. 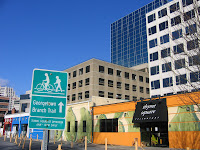 From quaint bungalows to shining steel and glass towers, Bethesda is a study in contrasts. It is also a study in urbanism. It is held up as one of the best examples of transit oriented development in the country and the real estate values seem to agree. At any rate, this district has a distinctly urban feel which more edge cities would be shrewd to adopt. All in all, Bethesda is a wonderful asset to the region, and worth a visit, even if just for dinner and a movie.
Posted by Matt' at 4:40 PM