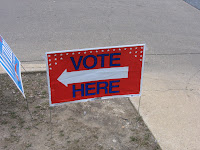 Well, I voted today in Maryland's Democratic primary. I thought originally, that since our vote came after Super Tuesday, that it wouldn't matter much, but it seems that I was wrong. At the time of this writing, CNN projects that Senators Clinton and Obama are separated by only 5 delegates. Mr. Obama can be congratulated on winning Virgina with more than 60 percent of the vote.

There is, however, still a long campaign season before the convention in Denver. I hope that Democrats can be united at the end of primary season. I can't afford 4 more years of a Republican administration, and I know many others feel that way.

I was pleased to note that voting still inspires a strong civic spirit in myself. On my way to my polling place this morning, I passed a sculpture I had never noticed before (because I'd never walked down this particular block). It seems designed to reflect the essence of America, and I think it does a good job. I can't get over how ironic it was, however, that I discovered it on election day. 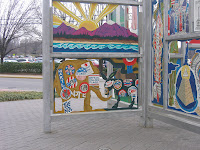 Anyway, Maryland's polls will be staying open an additional 90 minutes tonight because of the inclement weather in the area. So I will be waiting to hear results at 9:30. I think the decision was a good one, too. It took me an hour to take the bus less than a mile from my classroom to the Metro this evening. If I had decided to wait until after class to vote, I might not have made it.

Anyway, here's a toast to democracy. If your opportunity hasn't passed, go vote.
Posted by Matt' at 8:36 PM