Come on Ride the Train 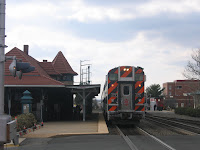 My workload was light Friday, so I decided to take a use the beautiful afternoon to take a ride on Virginia Railway Express. This was my first time on VRE, and I was impressed with the operation. VRE is now my second new rail transit system of 2008 (after Charlotte's Lynx). The trains have been running since 1992 and have been apparently attracting ever-larger crowds every year.
I took an early afternoon outbound train from Union Station out to Manassas and back. Perhaps it was just because of Friday's typically earlier rush hour, but the train was fairly popular even though it left Washington at 1:15. And even my return trip saw other seats occupied, though the train was far from full. 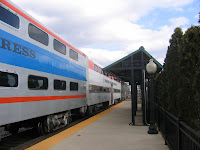 Virginia Railway Express is a good example of the ease with which agencies can start commuter rail systems. The system uses simple low-platform stations and many of the cars were surplussed by Metra, Chicago's über-commuter system. The trains operate on CSX and Norfolk Southern tracks, which is the case for many systems across the nation. Of course, simple does not mean a lack of service. The seats are plush, the ride smooth, the stations clean. 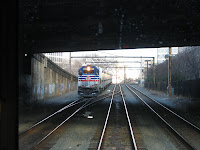 With fuel prices continuing to rise, I think we will see many new commuter systems start to open. So far, America's newest commuter rail system is the Music City Star in Nashville, but many other areas are considering this relatively cheap technology. 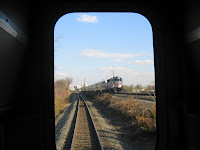 VRE is, of course, no substitute for the Metro, but it is an excellent complement and is a vital part of metropolitan Washington's transportation system. There are many ideas floating around out there for expansion possibilities for VRE and the Maryland counterpart, MARC. I hope to delve more deeply into some of the issues surrounding that in a later post. 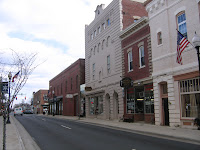 And before I close, I have to complement Manassas on a job well done. The historic depot serves VRE trains and Amtrak's Crescent and Cardinal and is in excellent shape. The narrow streets around the city center are well-occupied by storefronts and bustling sidewalks too. I was very impressed with this Prince William County town, I think it would be an excellent place for nice day-long getaway. With VRE, it couldn't be easier to get there either.
Posted by Matt' at 11:46 PM