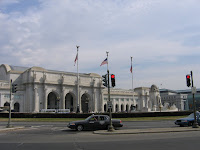 Washington's Union Station is one of the great spaces of our nation's capital city. The station acts as a glorious entry point for millions of passengers every year, and is a fitting gateway into Pierre L'Enfant's grand city. Prior to the advent of air travel, the station would have been the busiest entry point into Washington, but even Saarinen's futuristic terminal design for Dulles can't match the Beaux Arts building designed by Daniel Burnham.

The station celebrated its 100th birthday in October and is still going strong in a time when many cities have forgotten their long-razed train stations. The building is more than a docking point for trains; indeed it serves as an entertainment and shopping venue and is a must-see for all visitors to Washington. An estimated 20 million people visit the historic station annually.

Union Station plays home to Amtrak's intercity rail services, and is the southern end of the electrified Northeast Corridor, the high-speed rail line running to New York and Boston. Additionally, the station hosts thousands of daily commuters who arrive aboard Maryland's MARC and Virginia's VRE commuter trains. The Washington Metro has a subway station located at the far western end of the concourse on the Red Line.

The station fits very well into L'Enfant's concept of Washington as a grand capital, and its construction was a boon to the furtherance of the City Beautiful movement in Washington. The Station's construction allowed for the removal of the Baltimore and Ohio and Pennsylvania Railroads' terminals and tracks on the Mall. The location of Union Station is merely steps from the Capitol Building, which is framed nicely by an arch near the Metro entrance (below). The intersection of several of L'Enfant's radial avenues and the park-like setting south of Columbus Circle are an excellent example of how public buildings should relate to the urban fabric. 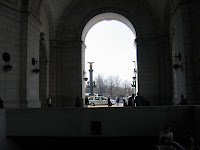 The interior of the station is awe inspiring. Burnham brought to bear the full toolbox of Beaux Arts with Union Station and created a breathtaking space in the Main Hall. This atrium, originally a waiting room for passengers is now home to many restaurants and shops. Further back is the original concourse, which serves as ticketing space for Amtrak. Upstairs, new space has been created for shops and downstairs, in the former baggage and mail room, is a food court. Further toward the rear of the building is the new concourse, where passengers wait to board Amtrak, MARC, and VRE trains. A theater also debuted in the late 1980s on the station's lower level. 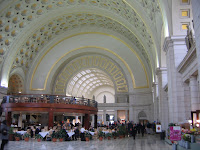 The station's role as a transportation hub for the city has been long-lived, but changes are needed to handle increasing passenger levels. Virgina Railway Express (VRE) reports a 16% annual growth rate in passengers since 2000, yet there is no room for expansion at Washington. The main constraint is storage capacity at the Washington Terminal (Ivy City) Yard. Currently VRE operates the maximum number of trains that storage capacity allows, yet some trains already operate full. MARC is in a similar situation, already running two trains to Baltimore for midday storage. Additionally, platform space is limited at Union Station, with 20 usable tracks. Only 6 tracks are available for trains headed south (VRE and Amtrak trains bound for Miami, New Orleans, and Chicago via the Cardinal).

If demand is to be met, major changes are needed at Union Station and the ancillary storage yards. I plan to do a detailed post on potential solutions to this problem as a part of my transportation futures series. So stay tuned.

Regardless of how these issues are resolved, however, Union Station will remain a vital part of Washington's transportation and cultural scene. Burnham's admonition to "make no little plans" is evident in Union Station, after all, it was he that told us "a noble, logical diagram once recorded will not die, but long after we are gone be a living thing, asserting itself with ever-growing insistence." And that precisely what Burnham's masterpiece does.
Posted by Matt' at 10:02 PM